As a young boy I remember how excited I would become as the opening theme song for the Lone Ranger would begin on television.  The Lone Ranger wore a mask and traveled the early west, along with his faithful side kick Tonto, helping people and rescuing them from evil and injustice.  Each episode after The Lone Ranger saved someone from the bad guys, as he rode off into the sunset, someone would ask “Who was that masked man”?

When Jesus was on Earth, we can see starting in Matthew 16:13, that he also helped a lot of people and very often people were asking the same question, who was that man.  Some people at the time thought that he was John the Baptist, maybe the prophet Elijah, Jeremiah, or some other past Prophet that had come back to life.

When Jesus asked Simon Peter who he thought He was, 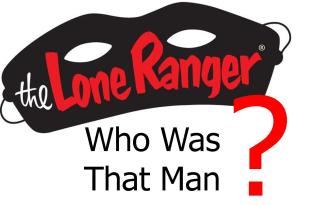 he answered, “You are the Christ, the Son of the living God”.  Jesus was pleased with his answer telling him that he was absolutely right!

There are many people today who don’t know Jesus as well and some of them are asking, “Who is this Man”?  Some people are saying that Jesus is a great teacher, or just a religious leader, or only a historical figure.  But just like Simon Peter, we know the right answer, the answer that needs to be shared, it’s the same that it has always been.  Jesus is our healer, our support, our provider, our friend, our comforter, and most of all our savior and so much much more.

He’s not a masked stranger, Jesus is the Christ, the Son of the living God.