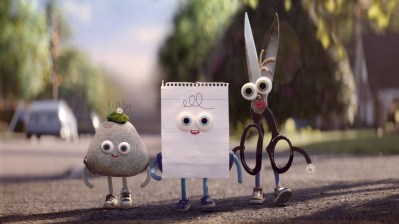 I would bet that most of us have played rock, paper, scissors many times as a kid and perhaps a few times as an adult too.  Did you know that this game can be traced back to about 25 BC? Well today this simple game is played all around the world and even has an international tournament.

One of the great things about Rock, Paper, Scissors is that any one of these items can be a winner.  I was thinking that if I was going to write a letter a rock or a pair of scissors would do me much good but a piece of paper would be great!  If I wanted to cut my hair a rock or a piece of paper wouldn’t be much help.  But that pair of scissors would be perfect.

Let’s say I was very thirsty, like desert thirsty.  A piece of paper or a pair of scissors wouldn’t do me much good.  However a rock would be just what I needed. You are probably wondering if I’ve gone mad but in Exodus 17:5-6 you’ll see just what I’m talking about.  Moses was leading the people out of Egypt and they were wandering in the desert for some time.  They were dying, their cattle were dying, their children were dying.  The people were very angry with Moses even threatening his life.

What did Moses do?  He went into His tent, went to his knees and prayed.  He told God of the situation.  God instructed him to go out to the rock at Mount Sinai, where He would meet him and to strike it with his staff and when he did there was water to drink, plenty for all.

This account of Moses gives us a great example to exercise in our own lives in times of trials.  Moses prayed, Moses listened, Moses trusted, Moses obeyed and Moses received.  It’s my prayer for you as well as myself that we remember this example, apply it when we are in difficult times throughout life and then sit back and watch God provide water from the rocks that are given to us.