My Tweets
Join 178 other subscribers 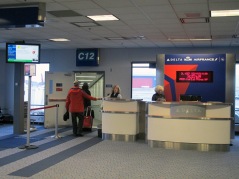 I was reading 2 Peter 3:9 which reads “The Lord is not slow in keeping his promise, as some understand slowness. Instead he is patient with you, not wanting anyone to perish, but everyone to come to repentance.” And It made me recall a time I was waiting at the airport.  I was watching a flight attendant at the gate across the hall helping her flyers to board.  After everyone seemingly had boarded she looked carefully for any stragglers.  She noticed a family that was running late rushing towards the gate.  She had schedule, the captain was ready,everyone else was ready, but she waited patiently, assuring that they made their flight.

Just as that flight attendant waited, God is patiently waiting for us to come to know Him.  His return may seem slow to us but His Word teaches us that His patience will run out and Jesus will return.  2 Peter 3:10 says, “But the day of the Lord will come like a thief. The heavens will disappear with a roar; the elements will be destroyed by fire, and the earth and everything done in it will be laid bare.”  But when this happens or when our physical bodies die, it will be too late to establish a relationship with God.

But there is good news.  If you have delayed, for whatever reason, deciding to follow Christ, you can still commit yourself to Him.  Romans 10:9 tells us, “If you declare with your mouth, “Jesus is Lord,” and believe in your heart that God raised him from the dead, you will be saved.”  He is calling, will you head towards His gate, will you run in His direction?  Now is the time to choose the Lord.